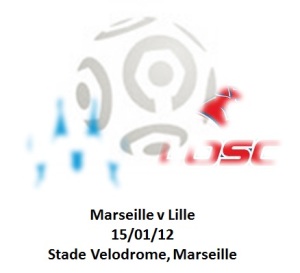 After staying indoors and keeping warm during the winter break, Ligue 1 is putting its shorts and shirts back on for a number of sizzling games, the pick of which will be Marseille against Lille. The first weekend of Ligue 1 fixtures in 2012 sees the two teams that ended the 2010/2011 season in second and first place respectively, pitted against each other for the second time this season.  Since the culmination of last season both teams have enjoyed somewhat different fortunes.  Lille have remained consistent in the league, having only been beaten once and remain unbeaten on the road. Marseille, of course, had a well-publicised disastrous start to their Ligue 1 campaign, sitting bottom after 6 games and fell behind Lille by 10 points in week 10. Since then OM have managed to fight their way through to the next round of the Champions League and claw Lille’s lead back to a mere 5 points.

Unlike when the two teams met back in week 3 of the season, Marseille find themselves in a much stronger position to face Ligue 1’s reigning champions. Rewind back to August, Didier Deschamps had tried various formations and starting line-ups, seemingly still unsure of his best team. Marseille had stop-started their way through the previous 3 games, stuttering their way to 3 draws. OM came unstuck against a Lille team, who fought back from being 2-1 down, to a courageous 3-2 victory. Now,fast-forward 5 months and Marseille enter this game after a recent resurgence in form having only been beaten once in 13 Ligue 1 games,  against 2nd placed Montpellier. In fact, in OM’s last 7 games they have won 6, drawn 1, scored 18 and only conceded 4.

Unfortunately, as great as all of these stats and comments sound, as a result of the African Cup of Nations, Deschamps finds himself without the services of a number of players who were key to the recent success. Arguably 2 of the league’s best attacking players, Andre and Jordan Ayew are away on international duty for Ghana, while in defence, Diawara is also not available for selection. This means that Deschamps will likely start with the same team line up that easily saw off SM Caen in the quarter finals of the Coupe de la Ligue on Tuesday night, with the only change being Mandanda returning between the posts ahead of Bracigliano. OM’s probable starting line up: 4-4-1-1 – Mandanda – Azpilicueta, N’Koulou, Traore, Morel – Amalfitano, M’Bia, Lucho, Cheyrou – Valbuena – Remy. Of course there are a number of different formations (4-3-3 and 4-5-1 being the most suitable) that this team could adopt, which may be beneficial against a Lille team good at retaining possession as well as attacking opposition weaknesses. I believe that it is imperative that OM do not continue to push a high defensive line against Lille, like they have against other teams recently, as with players with the pace, vision, skill and attacking prowess as Cole, Hazard and Payet they leave themselves vulnerable to Lille’s counter attacks and divisive through-balls. Attacking wise Marseille will look to continue with the competency that they have demonstrated in the last 3 games, netting 3 against Nancy, then 5 against Red-Star Paris and 3 against Caen. OM will be no-doubt be aware of the defensive instabilities Lille have demonstrated in their last few games where they have conceded a number of goals from wide positions or corners (1 v Ajaccio and all 4 v Nice), and this is only likely to be compounded by the absence of defensive mainstay Mathieu Debuchy who is suspended after his red card in Lille’s cup defeat at the hands of Lyon. This defensive weakness could play into the hands of Valbuena, Cheyrou, Remy, Amilfatano and Morel all of whom like to attack defences in this manner.

Here are the thoughts of Lille fan and writer for French Football Weekly, Andrew Gibney, with a more accurate account of the threat that Lille possess.

Sunday night’s game is one of the toughest Lille will face this season. A trip to the Stade Velodrome is never the easiest, but when facing the rushing juggernaut that is l’OM it becomes an even tougher job. Les Dogues recent form has been a little indifferent of late. In league games the defence has looked quite shaky. The fact that Nice scored four past Landreau must be worrying, Marko Basa went off injured that night as he did against Lyon in the cup and the Lille defence seems to fall apart without him.

Both teams have been weakened by the African Cup of Nations, by the looks of it Lille have been luckier than Marseille. Facing a team without the Ayew brothers and Souleymane Diawara seems a decent opportunity. Missing Moussa Sow is not the end of the world and gives Ireneusz Jelen and Roddy Rodelin a chance that they will hopefully grab with both hands. It is unlikely that Marseille will sit back and soak up the Lille pressure, at home they will need to come out an attack, this plays into the Lille game-plan. Rudi Garcia’s side struggled to breakdown a well organised Lyon defence midweek and luckily it doesn’t seem like they will face the same obstacle on Sunday night.

Playing on the counter attack suits Garcia’s men, especially if the front trio that starts is Eden Hazard, Dimitri Payet and Joe Cole. Playing on the counter will play into Lille’s strengths. The set-up of both teams makes this such an exciting prospect and should be an excellent game. In March 2011 the 2-1 win at the Stade Velodrome led Lille to the title. Let’s hope for a sense of Déjà vu.

(Andrew Gibney can be found through the excellent http://frenchfootballweekly.com website, or alternatively he can be followed on twitter @AGibneyftbl or @FrenchFtWeekly)

There is no doubt that this game has the potential to be one of the Ligue 1 games of the season, and in front of their own fans les Phocéens will more than fancy their chances of reducing the gap between the two sides to only 2 points. A win would go some way towards gaining retribution for the defeat at the Velodrome last season and the defeat at the Stadium Lille Metropole this season as well as giving Marseille the impetus, confidence and motivation to really push on for a Champions League place and possibly contest for the title again, something that a mere 3 months ago looked completely out of the question. Predicted result: OM 3-2 LOSC