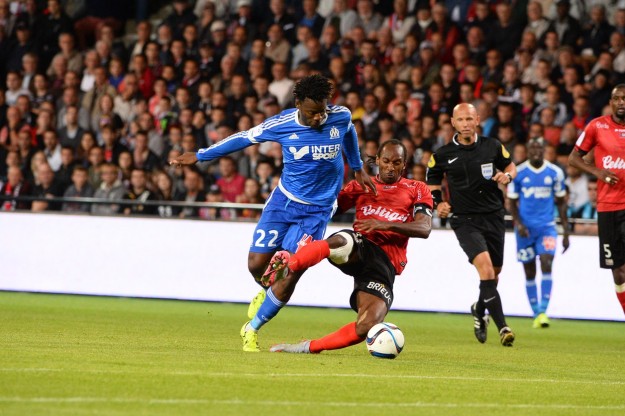 A week after securing their first Ligue 1 win of the season in convincing style, OM helped another Ligue 1 team to do the same, as they stuttered to an underwhelming 0-2 defeat at the hands of Guingamp.

Despite dominating long periods of possession (31%61) and having 14 shots on goal, OM couldn’t find the breakthrough in the final 1/3 of the pitch and the hosts efforts and endeavours allowed them to run out winners in the end.

After receiving the plaudits for an impressive performance against Troyes, Diarra gave OM the worst possible start as he gave away a penalty inside 60 seconds after a clumsy foul. Mandanda saved, but the penalty was poor. Diarra’s initial indiscretion was continued throughout the game as OM eventually picked up 6 bookings before full time, showing a surprising lack of discipline.

After 10 minutes OM gained some good possession, keeping control of the ball and building up to around 79% possession by the 15 minute mark, but this didn’t trouble Lossl too much still. Most of OM’s chances came through Batshuayi’s endeavours, as he ran, dribbled and took players on after struggling to receive anything near the quality he was provided with last week against Troyes. Diarra struggled to gain a foothold in midfield along with Barrada, whilst Cabella’ and Alessandrini’s contributions were sporadic at best and both lacked the final ball.

Mendy had a difficult night against Coco, however much of this could be put down to picking up a booking after only 15 minutes and having to hold back for the rest of the game. It felt as though he had to hold back from pushing forwards and so there was limited offensive work from him and Jacobsen managed well against the occasional attack down the OM left.

Having struggled in front of goal so far this season as we approached the final 20 minutes of the game, most could be forgiven for perhaps expecting a drab 0-0 draw, although us OM fans should know better than that. Guingamp’s first goal came after a foul on Cabella. EAG immediately broke up field. Briand rode his luck a little as he took the ball past 2 OM players and played in Privat for an easy finish, however, it must also be noted that in the initial ball up-field, Privat was clearly offside and as a result, the goal probably shouldn’t have counted. However, it did and this gave OM a slight push to look to attack.

Marseille managed to net, but this was correctly judged offside (unlike the Guingamp goal). As OM’s desperation deepened, Guingamp delivered the killer blow, a second goal, this time by Benezet. It must be said that it was a neat finish.

Are there any positives to take from the game? Hmm, not really. Some good saves from Mandanda, Batshuayi can create his own chances and erm, well I’m struggling to be honest. OM lacked discipline throughout and service was poor in the final 1/3 of the pitch as, there also seemed to be very little in the form of a ‘Plan B’, perhaps this is because there is no alternative to ‘Plan Batshuayi’, at least last season Gignac and Batshuayi offered something different to each other, they complemented each other in that they were contrasting and if it didn’t work with one, it could work with the other.

If nothing else, hopefully this game has served that as a reminder to Michel, and far more importantly to Labrune. This squad and backroom team has been decimated since the end of last season, a new manager and one win is not going to turn that around overnight. Get buying!! 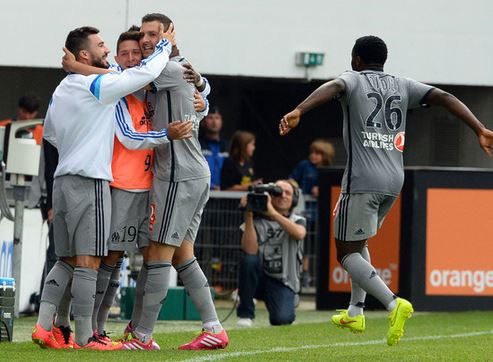 Marseille finally picked up their first win at the third time of asking, but made hard work of it against a poor Guingamp team. Bielsa’s side had the lions-share of possession and chances, however it was a sole goal from Andre-Pierre Gignac immediately after the interval the settled the result.

OM started the game positively, playing with some confidence that had been missing in last week’s shocking show against Montpellier. Passing and movement led to Marseille controlling the game from the outset and they began making the Samassawork in the Guingamp goal quickly. Dja Djedje and Payet first wen close, then Gignac and Thauvin worked the ‘keeper and woodwork a number of times each.

Despite this though both sides went in equal at half time where Bielsa opted to bring off the creative Thauvin for finisher Batshuayi. Within seconds of the restart, Bielsa’s change looked to have worked as Gignac broke the deadlock. Quick play down the left saw the ball played forward to Batshuayi. His first time lay-off to Payet was then crossed to the back-post where Gignac volleyed the ball into the ground, bouncing back across goal and beating Samassa.

The travelling OM fans managed to get their first glimpse of new-signing Barrada as he came on to replace Payet. Barrada immediately settled into the pace of the game showing some good vision and making some key passes. Marseille did lose some of their dominance and control over the game from this point, however, with our main creative outlets, Thauvin and Payet, both being off the pitch.

Guingamp searched for an equaliser later on, but other than Lemaitre clipping the cross-bar as he shot from distance on the only scares were injury scares. Firstly, Mandanda collided with Yatabare, the same two who met on the final day of last season, a collision which left Mandanda unable to join the French national side for the Brazil World Cup. Shortly before full-time, Gignac went down after  twisting his ankle, he was stretchered off but thankfully began training mid-week after recovering.

“We had several good opportunities and we managed to score. After going in front, we controlled the game pretty well. Defensively, the team played well and individually, the players did the job. We could have scored more goals because we had a number of good chances. The team defended very well and also constructed good attacks, but, on the other hand, we didn’t finish well.”

The expected carnival atmosphere for Bielsa’s arrival and the reopening of the Velodrome was quickly ended as a poor performance gifted Montpellier a 0-2 win over Marseille. 2 goals from poor defending, were the main talking points, when the most action the Montpellier defenders had was when they were replacing chunks of the Velodrome turf.

Despite the impressive grandeur of the refurbished Velodrome and expected raucus and optimistic atmosphere, OM never really got going, the occasion seemingly getting to a number of the players particularly those with defensive responsibilities.

Montpellier were lively from the off, pressing quickly and high up the field, leaving the OM defence exposed. The warning signs were there from the off, as a Dje Djedje mistake allowed Montpellier in, only for Mandanda to spare the defenders blushes with a good save. Minutes later there was nothing that Mandanda could do to stop a great finish from Mounier.

After dispossessing OM in midfield, Mounier was played through with acres of space down the OM right side, and he dinked a beautiful lob of Mandanda into the far post leaving the big man with no chance stuck in no-mans-land. This immediately led to some unrest among the Velodrome faithful, who were already concerned at the lack of composure and assertiveness the OM team were playing with.

As the half progresses, OM still struggled to create any clear chances. The closest opportunity came amongst a huge scramble in the Montpellier area as 3 shots were blocked in quick succession by a combination of desperate defending and solid goalkeeping from Jourdren. In the aftermath, Ayew was receiving treatment for a head injury, meanwhile the Montpellier defenders acted as ground-keepers replacing huge chunks of turf that had came up during the melee.

To be honest the state of the playing surface was almost as embarrassing as the OM performance. It will be interesting to see what Bielsa makes of the situation, and how quickly the pitch can be repaired and the problem rectified. The pitch will see far less sunlight than it has in previous years with the full roof being complete, while the turf looked very thin as it tore up. Anyway, I am in no way horticulturally educated, but it didn’t look good!

Many would like to have been a fly on the wall at half time to see Bielsa’s reaction to a tepid 1st half display, but whatever improvements he hoped for, really failed to materialise. OM still had difficulties breaking down the Montpellier midfield and defence, who defended in a 4-5-1 formation and then attacked well on the counter. Thauvin, Alessandrini and Ayew struggled to provide Gignac with any real service and as a result APG was very isolated. The same defensive issues that had dogged OM in the first half, were evident still too.

Montpellier’s second goal came from a break down the left and while Morel dropped to the centre, Sanson was free at the back post to pass the ball into an empty net. Imbula and the 2 wing-backs Mendy and Dja Djedje were left too far up the pitch and simply couldn’t track back in time to support the back 3.

Very little changed between that 68th minute goal and the end of the match, save for appearances from Batshuayi and Porsan-Clemente who struggled to get a foothold on the game the way they had in friendlies as the game ended 0-2.

What will be clear to Bielsa, if it wasn’t already, is that he needs some defensive investment. Although the collective of Romao, Sparagna, Nkoulou, Morel (and Mendes) have all done ok through the friendlies, the have struggled back in ligue action. There is also a lack of clear leadership amongst the whole squad, which isn’t a huge problem if the whole team knows their roles and responsibilities but a number of the players looked embarrassingly clueless in this game. I’d expect some hard training sessions this week ahead of next Saturday’s trip to Guingamp.

“The result was not the one we wanted but the game leaves much for us to work on. At first we were just as good as our opponents and then in the later stages of the first half I think we were better than them and we had chances. I believe the formation had no influence. The centre-back worked well but there were difficulties out wide. Perhaps when Romao moved to the right-hand side it looked like there was a problem but he was there because there was a lot of space to cover. Ayew is no stranger to playing as a second striker. I am aware, though, that any changes must be accompanied by results in order to progress. I’m not satisfied. Losing to a team who could finish in the bottom half of the table is not a great result. After winning one point from a possible six the media claim the players are uncomfortable with the new methods, but there is nothing new. Only two or three players played poorly tonight.”