After a disappointing Coupe de la Ligue exit at the hands of Lyon midweek, OM will look to re-focus their attention on the ligue, capitalise on Lille’s slip up against Saint-Etienne, and push closer for a 3rd place finish. Valenciennes are the opponents this Saturday afternoon at the Velodrome.

Although it was easy to feel hard done by on Wednesday, with some poor decisions from the officials, including a stone wall penalty for Khalifa and a red card for Lyon ‘keeper, Lopes, realistically OM didn’t perform like they could and should have. Starting without Gignac was always going to be a big risk, and without Mendy pushing forward, the only source of attack came from the right side with Fanni very occasionally supporting forward.

At the moment it looks like APG will regain his starting place, however it is proving to be difficult to predict the formation and midfield groupings as Jose Anigo either likes to rotate, or, more likely, is still trying to find his ideal starting line up.

Just before the winter break, Valenciennes had looked certainties for relegation along with Sochauc and Ajaccio, however, 2 wins in 2, against Valenciennes and Bastia has put them within 1 point of 17th placed Montpellier. Undoubtedly they will want to keep this form going and will see a ‘shaky’ OM as good opponents to achieve that.

As with most teams, OM will have to be weary of a Valenciennes counter attack, a number of their opportunities against Monaco came from these, particularly when Monaco pushed men forwards in search of an equaliser.

Marseille, should have more than enough at their disposal to see off Valenciennes and take themselves to within 2 points of Sant-Etienne, however, the game will not be as easy as it might look on paper.

A late Andre Pierre Gignac goal was the difference between the two sides at Le Stade de Hainaut. A draw would’ve probably been a fairer result but OM found a way to sneak all 3 points. This was generally a pretty tight match containing few clear cut chances. OM failed to exploit VAs potential weaknesses, especially in the 2nd half. The only change OM made was a forced one – Benoit Cheyrou in for the injured Gilbert Imbula. They lined up in their familiar 4-2-3-1 formation, although the attacking quartet were very fluid and roamed around the field a lot. The first half contained relatively little action. In the 5th minute, Dimitri Payet had a shot deflected over the bar as OM generally had control of the game. They were given a massive scare mid-way through the period though when Bahebeck beat the offside trap and found himself all alone in the area. Fortunately for OM, he failed to control the ball properly and it was a massive let off. At the other end, Gignac should’ve scored just moments later when he lobbed just wide following a Penneteau cock up.

Marseille’s number 9 was very active in the 1st half and looking pretty sharp upfront. In the 25th minute he controlled well before unleashing a shot which passed wide of the post. OM were on top at this stage and Andre Ayew had a decent chance on the half hour mark, but his header was saved by Penneteau. The rest of the period went by without major incident, although just before the interval Mathieu Valbuena nearly scored a sensational goal, cracking a volley from over 30 yards out which passed just over the bar. 0-0 was a pretty fair reflection of the 1st half, although OM did appear to have more control and generally looked the more likely to make something happen.

Things weren’t so good after the break for Elie Baup’s men as they struggled to create chances. Valenciennes came into the game more and Mandanda made a good save to deny Bahebeck early on in the period. OM gradually improved and forced a succession of corners on the hour mark, but they couldn’t make their pressure pay off. What followed was a stalemate for about 20 mins before everything kicked back into life towards the end of the game. Mathieu Dossevi had a massive chance for VA but Mandanda saved well. On the rebound, Maor Melikson had an even bigger occasion but somehow fluffed the opportunity. The hosts had blown a massive chance to go ahead and OM would punish them just a few minutes later.

Slack marking from a corner allowed Andre Ayew a free header which Penneteau could only parry. Gignac, ever the poacher was on hand to convert and gave OM a 1-0 lead. With just 5 mins left it looked like OM had sneaked all 3 points. But VA should’ve had their share of the spoils and missed a humongous opportunity with not long left on the clock. A poor error from Nicola Nkoulou allowed Opa Nguette time and space at the back post, but he put his shot wide when it looked harder to miss! Saber Khelifa had come on for OM and he nearly scored what would’ve been a superb individual effort, but his late attempt was well saved by the keeper. That was to be the last piece of action as the final whistle was blown soon after. A very good and hard fought 3 points to pick up. This sort of victory is the sign of a good team who manages to find a way to win when not playing all that well. 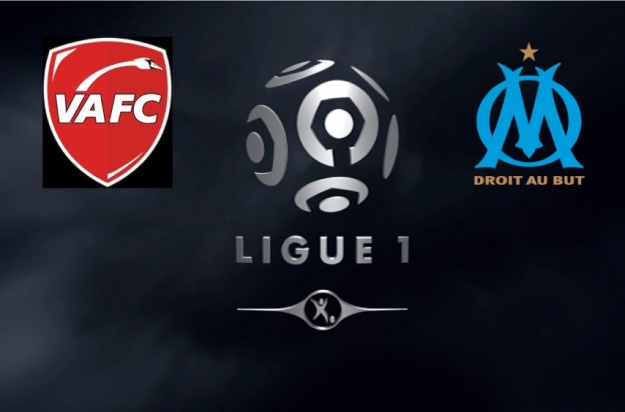 After a fantastic start to the season and a 100% record, OM headed to bitter rivals* Valenciennes only to be humiliated in a 4-1 defeat. This is was happened in week 7 of Ligue 1 last year and Marseille will be keen to avoid a repeat of this abysmal performance. Marseille have again managed a 100% record, winning 2 from 2, Valenciennes have won one and lost one.

Giannelli Imbula won’t feature, he was withdrawn at half-time against Evian with an ankle injury. Imbula thankfully returned to training on Thursday, although this was just a fitness session away from the rest of the squad, and it was decided he was not yet recovered enough to feature.

Having played relatively well against Evian it looks increasingly likely that both Diawara and Morel will keep their starting places ahead of Mendes and Mendy. Failing a injury or suspension to either, we are in the situation where unless they play incredibly poorly, they are likely to keep their places, of course in a tight game a bad performance from either of those players could result in conceding a goal and losing, so for the benefit of the team, we may have to keep them in the 11!

The final new signing of the summer, Saber Khalifa, who missed the games against Guingamp and Evian is fit enough to make it into the squad, although it is not expected that he will start.

As obvious as it may sound, Payet, Valbuena and Andre Ayew should be the focus of OM’s attack. Valenciennes can be susceptible to attacks down the wings and often give away free kicks around the 18-yard box. The close link-up play between Payet/Valabuena and Gignac has been excellent so far this season and their skill and control should help them overcome a Valenciennes defence that conceded 53 goals last season.

Daniel Sanchez’ team limped to the summer last season, only picking up 19 points from the final 19 games. They will be hoping to secure safety early this term though and push for a top-10 finish. This will be tough for VAFC though who lost Nicola Isimat Mirin (Monaco) and Gael Danic (Lyon). They have signed Bahebeck (psg), Chitu (Vitorul Constanta), Enza Yamissi (Troyes), Doumbia (Wolves), Novaes (Bastia). Out of these signings it is only striker Bahebeck, who is yet to open his scoring account for VAFC, who is most likely to start. Given his first performances he is likely to be involved in VAFC’s build up play and he set up one of the goals in their 3-0 win over Toulouse.

Rudy Mater has had an excellent start to the season. The right-back has pushed forwards helping with the VAFC attacks. As a result, 43% of Valenciennes’ attacks have come down the right this season. Interestingly, 46% of OM’s attacks have come down their left with Andre Ayew (not down the right with new signing Dimitri Payet). This should make for an interesting battle on the Marseille left side, with perhaps the successful team being the one that has the most success here.

Summary
After having to overcome the 1-4 defeat at the hands of Valenciennes last season in order to push psg close to the title, OM will need to make sure they don’t drop any points needlessly so early on in the season, especially given the start that title contenders Monaco have had. If OM keep their defence tighter, which they did improve in the Evian match, they should have enough in attack to ensure a win.

*In 1993, the year that Marseille won the Champions League they also won Ligue 1 for the 5th consecutive time. The week of the Champions League final against AC Milan, OM had a game against Valenciennes which, if they won, would mean that they would win the Ligue without having to beat title rivals psg in their final game of the season. Marseille beat Valenciennes 1-0 and as a result secured the Ligue 1 title before going on to beat AC Milan in the final to be crowned European Champions. Unfortunately, though rightly, it emerged that Valenciennes player, Jacques Glassman and two of his team mates had been bribed by OM player Jean-Jacques Eydelie to take it easy in the game between the two sides. In the fall out of the bribery OM were stripped of the Ligue 1 title and relegated. As a result there has always been a little tension between the clubs and fans.